Hollywood’s community leaders convened to hear the latest updates in the Fourth Council District at the Annual Luncheon with Councilmember David Ryu presented by the Hollywood Chamber of Commerce at Avalon on Thursday, September 27th.

Serving the third year of his first term, Ryu started his remarks talking about parks. He noted that there were 42 city parks within his district, and that the most popular parks bring in over four-million visitors each year. His office immediately started on a new circulation plan and began the first-ever park-wide study on safety, access, and mobility around Griffith Park and the Hollywood Sign. They expanded the DASH service to 7 days a week running every 15 minutes from the Metro Red Line to the Greek Theatre, the Observatory, and installed new signs and benches to attract more riders.

“In the last year since expanding service, we have given over half a million rides – more than double the ridership the prior year. And it continues to grow. This past Summer, we saw ridership climb to over 62,000 in July – a 28% increase over the same period last summer. We also ran a pilot for dockless bikes in Griffith Park offering visitors a cheap, fun, and car-free way to get around with fewer emissions and less smog for our park.”

Ryu highlighted his successful negotiation of a new five-year contract for the Greek Theatre with SMG which comes with over $4-million dollars in capital improvements that will help preserve and enhance the 88-years-old theatre. Ryu also noted that traffic and mobility remain his top focus in the park with both short-term and long-term strategies.

“We’re currently bringing in new wayfinding signage and working with Google and Waze to ensure accuracy and safety. We are looking at new DASH and electric shuttle-bus routes establishing specific ride-sharing zones and a number of other strategies to make park transportation more multimodal and the park more enjoyable for visitors, neighbors, and wildlife.”

Ryu said that many of these strategies can be found in the report he commissioned with Dixon Resources. Central to that focus is the Hollywood Sign. Ryu underlined the fact that the symbol of our City had no viewing platform, no visitors’ center, and limited access to see the world’s most famous Sign.

“For starters, the Sign must get the resources it needs. And after working with the Mayor’s Office, I’m incredibly proud to see that included in the 2018-19 budget. The Hollywood Sign and surrounding neighborhoods have over $1-million dollars in dedicated traffic enforcement to properly guide visitors to the best access points. Solving congestion and allowing visitors to enjoy the icon of our City all comes down to access.”

Ryu said that since this report came out in January, they have made significant progress as City Departments such as the Bureau of Engineering and Recreation and Parks have studied the 29 strategies from the Dixon report for their feasibility and impact.

“In fact, just yesterday thanks to the leadership of Committee Chair Mitch O’Farrell, the joint report was heard and unanimously approved in the Arts, Parks, Rivers and Entertainment Committee and sent to City Council for a full vote.”

In Runyon Canyon Park, Ryu’s office has been busy conducting crucial maintenance, successfully expanding the park by nearly 15 acres last year. They currently have a study underway collecting user data and providing insight and analysis to the park.

“While the Runyon Canyon Park has 1.8 million visitors a year, it has no restrooms. This study is going to look at everything: trail restoration, parking and congestion, park access, and water reclamation to make the park more sustainable. If we want our signature parks to be here tomorrow, we must invest in them today.”

Speaking about roads and transportation, Ryu introduced the motion to bring dockless bikes and scooters to the City of Los Angeles. He has also introduced legislation on autonomous vehicles, and pushing the City to take on rules for this growing industry “before it comes and overtakes us.”

On the crisis of Homelessness facing the City, Ryu is addressing the issue with the resources it deserves with two projects that will help those who are most vulnerable to falling into homelessness, women-led families, foster youth, and senior citizens.

“In my district, the flagship project to take on this issue is the LGBT Center’s Anita May Rosenstein Campus in Hollywood. This project was made possible through private support and at my urging nearly $9-million dollars in City funding. Set to open in early 2019, it will change the face of homelessness in Hollywood. Once open, it will provide a roof for 225 individuals experiencing homelessness, and is estimated to create an additional 200 jobs for local homeless services providers. Further north on Gardner Street, they’re also about to break ground on a Women’s Bridge Housing project at a city-owned library that’s been closed and will house over 30 women in 2019.”

Ryu noted that homelessness is not solved with housing alone, and that the homeless crisis is as much a mental health crisis and poverty crisis as it is a housing crisis.

“To discuss real solutions to homelessness, we need a new conversation on mental health. Because the effects of ignoring this issue are camping outside on the street every night. That is why I have joined with the County to push the State to reform its grave disability law and to ensure that every homeless project we build has on-site mental health professionals and addiction services for every resident.”

And finally, Ryu discussed the initiative of Children’s Saving Accounts, a universal program also known as a CSA program that would put college on the map and make it within reach for anyone willing to work for it. His office is working with the City, the County, and LAUSD and together they are making progress on this revolutionary initiative.

“A Citywide CSA program would give every child in Los Angeles a savings account – and a little seed money for their higher education. Children and families would be allowed to deposit into the account, but can only withdraw when the child has graduated high school and is using the funds for post-secondary education. Through incentive and matching funds programs, students can add to their account and can also be connected with financial resources to pay for college. Just by planting the seed in a child’s head, just by creating that expectation for higher education, we can bring opportunity to an untold number of children helping build our economy and strengthen our middle class.” 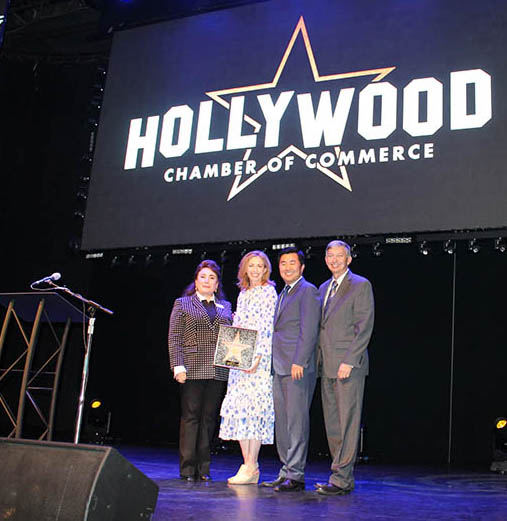 At the conclusion of his remark, Chamber Chair Donelle Dadigan (left) and Leron Gubler, President & CEO of the Hollywood Chamber (right) presented a plaque to outgoing Chief of Staff Sarah Dusseault, after serving the office since Councilmember Ryu’s inauguration in July 2015.

About the Hollywood Chamber of Commerce – www.hollywoodchamber.net